The 18-month Fatal Extraction investigation has brought together data and records from Australia and Africa in a way that hasn’t been done before, combining corporate information from the Australian Securities Exchange (ASX) with months of on-the-ground work by reporters throughout Africa.

While reporters travelled more than 30,000 kilometers, digging through dusty public documents and finding victims and witnesses who have never spoken to media before, ICIJ’s data team focussed on collecting and analyzing available data to build out a more comprehensive picture of Australian mining companies’ presence in Africa.

Together, the data team and reporters reviewed financial reports, announcements and news articles reporting fatalities directly or indirectly connected to mining activities in Africa. We were able to document more than 380 deaths in 13 African countries since 2004.

With the assistance of the African Network of Centers for Investigative Reporting (ANCIR), we also reviewed more than 1,000 annual or quarterly reports and company announcements to investors to identify all mining companies listed on the Australian Securities Exchange (ASX) that were actively exploring or producing minerals on the African continent as of December 31, 2014. We found 152 companies active in 33 countries.

The first part of ICIJ’s analysis consisted in counting and documenting all fatalities that occurred on African mining sites operated by Australian publicly traded companies starting from the beginning of 2004 up to June 11, 2015. We relied on automated processes supplemented by manual searches for the most recent months.

Most of the deaths ICIJ found were recorded in company reports posted on the ASX website or in announcements to investors. ICIJ combed through documents searching for specific keywords that would identify fatalities in connection with mining activities. In order to identify the mining companies listed since 2004, we purchased historical listings from Investogain Australia. 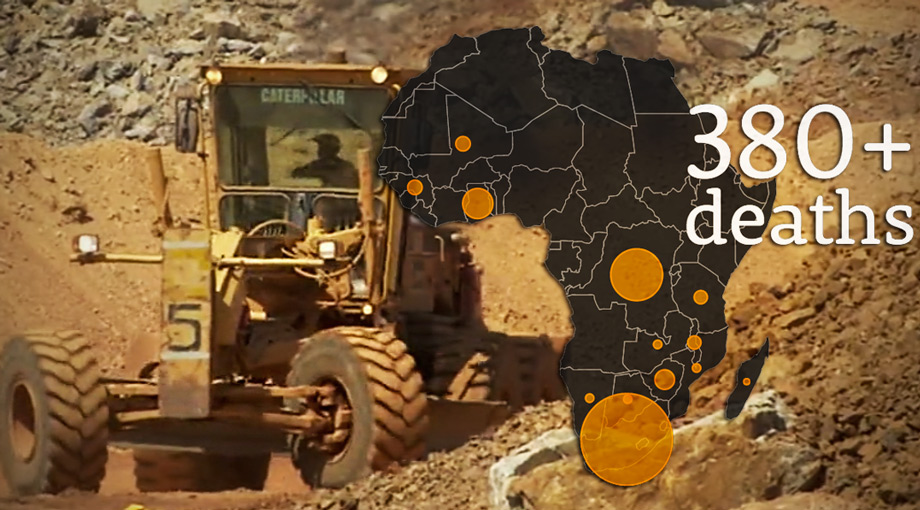 As ICIJ used automated processes for identifying potential fatalities in mining company reports, there is a chance that some may have been missed and our analysis may be undercounting the overall number of deaths recorded by the companies. All fatalities identified by the automated process were manually checked and re-checked to ensure accuracy.

We also sifted through the news media archival databases LexisNexis and Arachnys to find all fatalities reported in the media. We cross-referenced the media reports with our findings from the mining company documents to ensure we did not double-count any deaths.

ICIJ included fatalities directly related to the mining activity (such as deaths from a landslide or onsite vehicle incidents) as well as fatalities indirectly related to the mining company’s presence in Africa (including deaths resulting from protests, assaults or other violence) that were reported in company filings, legal submissions and media reports.

Inclusion of fatalities on mine sites or in connection with a mining company does not suggest or otherwise imply that the company is liable or legally responsible for the death.

Companies active in Africa in 2014

ICIJ looked at all the last quarterly reports of 2014 published on the ASX website by companies belonging to the “Energy” and “Materials” sectors. Within this pile of documents, we ran a text-matching script to identify those listing “mining tenements,” a type of license that indicates a company is active in a particular location, and/or the name of an African country to identify countries that were active in mining on the continent as of the end of the year. We also looked at annual reports of companies in the same sectors for any mention of African countries, and then manually identified any additional companies active in Africa that hadn’t turned up in our search through the quarterly reports. The combination of searches allowed us to more comprehensively identify companies that were active in Africa as of December 31, 2014.

Explorers and producers, licenses and agreements

The idea was that we would identify explorers by looking at the quarterly reports - where companies list their exploration licenses to comply with ASX listing rule 5.3.3 - and producers by looking at annual reports where they list operations.

We double checked that we were not missing any company by crossing our results with a list provided to us by the company SNL Metals & Mining. We were also able to download a list of all ASX companies active in Africa, thanks to the mining database InfoMine, and we crossed their results with ours to identify companies our other processes might have missed.

We then logged the number of mining operations, licenses and farm-in agreements for each company/country combination. Farm-in agreements allow another company to join an existing licensee on a piece of land in drilling or exploration. ICIJ counted them in the “licenses” category. For every company, we also listed the minerals they reported exploring or extracting in each African country in which they were active.

By combining data work with field work, ICIJ’s Fatal Extraction investigation has revealed the extent of Australia’s presence in Africa, as well as a potentially troubling track record by some companies in the rush for the continent’s minerals, including practices that would be impermissible and unthinkable within Australia and other parts of the developed world.

Explore the country-by-country data in our interactive database to learn more.

Contributors to this story: Mar Cabra and Hamish Boland-Rudder

Register for updates and alerts on ANCIR Investigations.