Mining: A question of targets


Mining has always been a dangerous business. But an investigation by a global group of journalists raises new questions about whether foreign-headquartered companies like Aquarius Platinum and Anvil Mining take a more laissez-faire attitude to safety at their mines in Africa than they do at home.

The cold numbers are arresting: in the decade leading up to 2014, 387 people died in mines across Africa owned by Australian-listed giants, including Rio Tinto, BHP Billiton and AngloGold Ashanti. The vast majority of these deaths, 244, were in SA.

Eric Gcilitshana, National Union of Mineworkers (NUM) secretary for health and safety, says part of the reason fatalities are so high in SA is the “long years of apartheid where life was cheap … and miners had no rights”.

Gcilitshana concedes that there have been big improvements, but says the attitude of miners’ life being cheap “still infects the mines”.

The deadliest Australia-listed mining company to work for, according to this new investigation, is AngloGold Ashanti, the gold behemoth listed in five countries, including SA. Altogether between 2004 and 2014, there were 209 deaths in its African mines — 171 in SA. 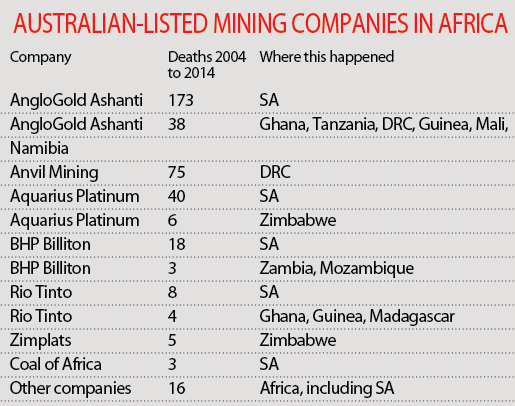 AngloGold’s worst year was 2004, when 30 people died, including two in an elevator at its Tautona mine near Carletonville.

A furious NUM, at the time, slammed AngloGold for running “mines of death”.

Today, that might be true, as it recorded only six deaths across the continent last year.

The investigation shows that the number of fatalities on SA mines is around four times that of Australian mines.

AngloGold’s mines in SA, for example, are “deep, extensive and labour-intensive” — often snaking underground as far as 3,8km. In Australia, by contrast, mines are largely open cast and heavily mechanised.

Nonetheless, Bailey says fatalities have decreased markedly since the company instituted a “relentless” focus on safety over the past seven years. “On a safety level, no [gold mine in SA] comes close” to AngloGold, he says.

One of the worst examples of mining deaths in recent years was a gruesome incident in 2010 at Aquarius Platinum’s Marikana underground mine, a few kilometres away from Lonmin’s own tragic Marikana incident two years later.

At the Aquarius mine, a gigantic slab of rock fell from the ceiling, killing five contract miners working 70m underground.

Aquarius spokesman Charmane Russell says “every step possible has been taken to ensure that there is not a repeat”.

But experts are still concerned.

“That sort of toll would not be tolerated here,” Prof Michael Quinlan, director of the Industrial Relations Research Centre at the University of New South Wales, told the International Consortium of Investigative Journalists (ICIJ).

“In Australia, if a company has had a run of fatalities, it wouldn’t need to get anywhere near 40 before the mine inspectorate would start to get very concerned.”

In all, Aquarius reported 38 deaths between 2004 and 2014. This is higher than all deaths during the same period in Western Australia, which has at least five times as many employees as Aquarius.

But Russell points out that Aquarius is better than its peers on the Bushveld complex and Mimosa in Zimbabwe is now the “safest platinum mine in Southern Africa”.

“So to say that the company’s safety standards in Africa are different from those in Australia is somewhat disingenuous,” she says.

There are worse stories than Aquarius. In particular, the dark tale of Anvil mining evokes the worst fears of a continent ravaged by overseas companies who pillage the resources without care for the people who extract the commodities.

In SA, fewer people are dying than ever before, but one analyst says progress could be far faster. “Other countries have far more demanding targets than we do,” he says.

And SA is still worse than other countries.

In November, SA’s chief inspector of mines, David Msiza, said that “even though we are falling short of the milestones, we have made significant progress”.

While many initially doubted that zero fatalities was a practical target, Msiza said that “zero harm is possible in the industry [and] the coal sector could reach … [a] zero fatality rate by 2015”.

Gcilitshana says there are still some dangerous “short cuts” being taken on the mines by workers so that they can hit targets and qualify for incentive bonuses.

The average wage for a miner in Australia is around A$120 793 – or a whopping R1,1m. In SA, by contrast, the Association of Mineworkers & Construction Union has still to get agreement on a R12 500/month starting salary, an annual package of R150 000.

Register for updates and alerts on ANCIR Investigations.